What cooperatives are and why Arganiae buys their organic argan oil?

The cooperatives that produce organic Argan oil and all Argan products in general, are social organizations. In fact, they have often been founded in order to give the possibility to the partners to put together their oil production and allows them to be competitive in such a specific market. Cooperatives are often organised in a democratic way and are strategic for the marketing of Argan oil products.

In the field of Argan oil products, the first cooperative run by women saw the light of day in 1998 about in T'Manar, 72 km south of Essaouira, and since then T'mnar has been the capital of this industry. Subsequently, the number of cooperatives founded with the aim of enhancing women in rural Morocco has grown exponentially to build a network.
The network provides employment and therefore guarantees an income, within the framework of the Fair Trade market, to women from the different neighbouring villages. They are employed full-time or part-time. This allows many families to afford medical care and education for their children as well as attendance at adult education programmes.
A fundamental reason for the birth of cooperatives for the production with traditional methods of Argan oil was the growing awareness by the natives of the importance of the Argan tree and the consequences of deforestation.
In addition, many ambitious government projects have also been proposed to encourage community initiatives, such as planting and protecting the Argan tree forest, thus taking a significant step forward on the road to socio-economic and environmental development.

Today many people think that most of Argan oil is produced by cooperatives, but that’s not true.
The share of cooperatives in total production is greater than the individual contribution of the past, but if we compare the quantities produced industrially with machines with the traditional slow production, it is obvious that the latter cannot keep up with speed of production and therefore with quantity.
The women of the cooperatives, encouraged to use their valuable knowledge to collect the fruits of Argan in a sustainable way, contribute to the realization of a wider project of sustainable development, which is not the case in big industry.
As for the opening of the Argan hazelnuts, many attempts at modernization have failed. Many cooperatives have adopted new methods of mechanical extraction. Many others, aware of the best quality of organic Argan oil production, have continued to use the ancient method by hand despite the high costs and competition with private entrepreneurs.
Despite some initial difficulties in competition with large-scale markets, the production of Argan oil of cooperatives is changing the economy and consequently the life of a large part of the population (about 3 million people) in all areas of Argan oil production.
They began to see the potential of foreign markets and to exploit the support provided by the Mohammed VI Foundation for the research and production of Argan oil and the technical support offered by some international organizations for the marketing of their products.
This will help cooperatives to secure local and international markets against the terrible propaganda of the cosmetics industry and the low-quality fakes that are flooding many of these markets. Handmade according to tradition
In addition to the genetically modified "new" Argan trees, one of the greatest dangers that these cooperatives are facing comes from what in a mystifying way is called "modernization" which has as a consequence the modification of the ancient, fundamental and complex extraction and processing techniques and influences the quality of the final product.

Why should you buy organic argan oil from cooperatives?

To put it briefly: forget any presentation of part of the organic Argan oil if you really want to buy pure Argan oil! Ask any olive oil connoisseur and they will tell you that the oil extracted by artisanal method is far better than the one extracted mechanically. And it’s the same with regard to Argan oil. Only a few "promoters" of Argan oil know the true qualities of a product handmade according to tradition.
If you are going to buy pure organic Argan oil, make sure you do so at the source or from sellers who buy directly from the cooperatives on site.
In this way you will support the very hard work of women cooperatives, at the same time you will be sure to buy the best product and eliminate the risk of buying an industrial product.

On the other hand, to meet the growing demand of the world market for Argan oil, other more sophisticated extraction methods have also been adopted. These can be more effective and faster than the traditional method for the production and bottling of Argan oil, but nevertheless chemical extraction exceeds traditional and mechanical extraction. In any case I would not define these methods "advanced" especially the mechanical one to 100%, because the quality and the potential of the oil of Argan so produced cannot absolutely compete with those obtained with the traditional method.
Most of the methods that use mechanical crushers consist in reducing the kernel to powder before crushing the interior directly, skipping the passage of the addition of water that is considered useless and superfluous. In this case, the kernels used are often raw (not roasted) to obtain a greater quantity of oil, but are of lower quality when compared with roasted kernels. The extraction time is much faster. It takes 2 hours to extract a liter of oil.

The process of purification of argan oil

Unlike the chemical process of Argan oil extraction, the oil obtained with traditional and mechanical methods is further purified. After the oil is left to rest to allow the sediments to go to the bottom, the purification process begins: various filtrations are necessary to achieve the right degree of purity and clarity of Argan oil. Arganiae requires its suppliers 25 cotton filters for each process. The oil is then decanted into new containers to reduce the volume of the sediment. And yet the final pure product may still contain small amounts of sediment. Contrary to what many people think this is absolutely not a sign of bad quality oil, indeed it is a "certification of authenticity" of pure organic oil. 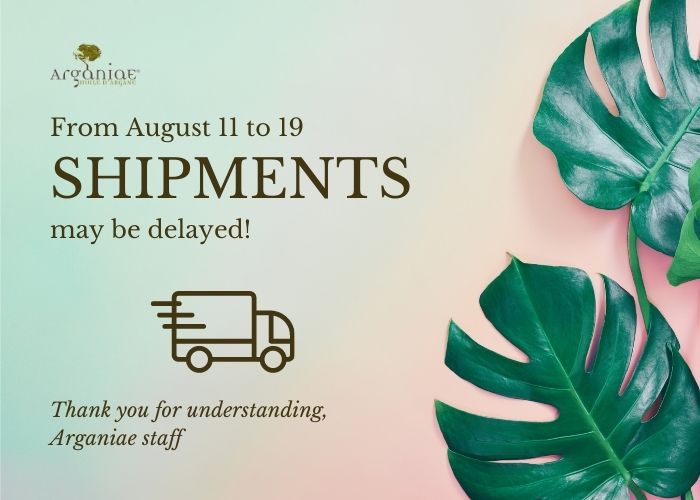